"With a spirit of innovation, Bowling Green State University is a premier, inclusive learning community that develops, transforms, and impacts individuals and communities through learning, collaboration and discovery."

With a spirit of innovation, Bowling Green State University is a premier, inclusive learning community that develops, transforms, and impacts individuals and communities through learning, collaboration and discovery. As a public university, BGSU focuses on contributing to the public good and embraces its role as a national model in addressing the educational, economic and social vitality of our region, the state of Ohio, the nation and the world.

Bowling Green State University provides holistic and comprehensive educational experiences that enhance the lives of our students, stakeholders and the many publics we serve. Our graduates are prepared for lifelong personal and career growth and for engaged citizenship and leadership in a global society. Through our excellence in teaching, research and outreach, BGSU builds a collaborative, diverse and inclusive community where creative ideas, new knowledge and entrepreneurial achievements can benefit others in our region, the state of Ohio, the nation and the world.

On his time at BGSU:
I graduated at the top of my class in 2004 with a Bachelors of Arts and Sciences, and emphasis on video production. I have always been extremely focused and driven, with a passion for the broadcast industry. My goals and aspirations led me to Bowling Green State University, because their program was exemplary. I always knew where I wanted to end up – behind the camera; and Bowling Green had programs and hands-on opportunities that gave me an advantage within the industry.  BGSU has a reputation as one of the best schools for broadcast, and I am extremely grateful I had the opportunity to learn from their top-notch team of talented educators and industry experts.

Additionally, BGSU is also a very involved, hands-on university, with respect to teamwork and collaboration. I remain invested in my alma mater and continue to volunteer with the students, informing them of the role broadcast plays in live events. During my time at Bowling Green, I met Joe Phillips, one of my teammates here at Quince. We’ve worked together in several instances over the years, and I’m proud to say we are working together once again, here at Quince. Through alumni involvement, I also formed connections with Jared Calvelage and Tim Crnko. Both studied together at BGSU, and both have also joined the Quince family. I am extremely grateful to the broadcast programs at BGSU, as well as the connections and long-term relationships that I’ve built over the past 20+ years.

"Regarding exceptional learning experiences, I have to emphasize that a huge part of my success is attributed to my involvement with BG24. Myself, as well as the other BGSU alum that now work for Quince Imaging, received the same core background working at the station. The experience we received from working there was invaluable, and we leverage that experience to produce top quality video production at Quince." On his time at BGSU:
In fall of 2011 I began my program of study at BGSU, as a Telecommunications major. I received an internship with WBGU in 2013, getting hands-on broadcast experience at the station. My experience at the station led to an opportunity to work on a documentary, where I expanded my video shooting and editing skills, and began building successful client relationships. The experience increased my confidence and gave me additional opportunities to build my skills. Later, I was hired to work at WBGU-TV PBS, until I graduated in 2015. During my time at BGSU, I was also introduced to Tim Crnko and Kevin Tennant, who are now my colleagues here at Quince. Tim did a lot of work on the sports side of broadcast. He was a great co-worker then, and an even better team member here at Quince.

Shortly before graduating, I was introduced to Kevin at a Career Day event. As an alum that has kept a close relationship with BGSU, Kevin had a lot of insight on the industry, and his presentation at Career Day was really impressive. He explained the role of broadcast production in live events, and really wowed us with Quince’s Cleveland Cavaliers projection mapping presentation. We ended up staying in touch, and through Kevin’s role in Quince’s relationship with the Cavs, we reconnected when I was hired on as utility for the NBA Finals in 2015. Through Kevin’s referral, I was brought on board with Quince shortly thereafter, and the rest is history.

"Team members make all the difference, and I’m really impressed by the contributions of our team here it Quince. We truly are a family. On show site, we see each other 10 or more hours day, which is definitely more than we see our own families. And it works, because we each have a role to play in making sure each show is a success, and we are always willing to support one another. We are constantly evaluating and pushing the envelope, which is exciting. In this industry, there will always be something to learn, research, and delve into. That is never going to change at Quince. We will always be looking for new ways to grow and innovate.
" On his time at BGSU:
My passion for broadcast began in high school, where I was very active in AV classes and clubs. I got my start in the industry filming sports and video shows in high school. I knew from that point I wanted to do more in the industry, and set my sights on BGSU. I studied Telecommunications and Broadcast, graduating in 2007. I got involved right away, and worked for BG24 News, and WBGU-TV PBS throughout all 4 years at BGSU. It was a great opportunity, because I was getting paid while receiving real, hands-on education.

Regarding relationships at BGSU, I have to give a shoutout to Professor Jose Cardenas – all of my Quince colleagues/BGSU alumni, had the pleasure of learning from this amazing man. Jose got all of us excited about the industry. He taught everyone about the lifestyle, and prepared us for the demands of this grueling, yet rewarding industry. Jose was the Godfather. He laid groundwork for all of us, and his motivation and preparation significantly impacted the success we’ve experienced in our careers today.

"Media production companies weren’t talked about in school, and at Quince, we are putting a light on this sector – there are broadcast opportunities available beyond news industry and sports, and movies. Myself and my fellow BGSU alumni, all agree that the opportunities provided by this industry have allowed us to leverage our broadcast background as a threshold for innovation, with unlimited potential for creating immersive live and broadcast experiences. Projection mapping on buildings, at concerts, and in ballrooms, just to name a few.
" On his time at BGSU:
Developing a passion for video production at a young age, I was blessed to study and work on my craft at BGSU. The opportunities available to me, from student organizations and classes to working at WBGU-TV, allowed me to develop skills and work in professional broadcast environments throughout my studies.

My experience at BGSU, working in television and sports broadcast, has been a huge asset to my career at Quince. When we transitioned from in-person to virtual events, I had the opportunity to put my knowledge to use.  Above all, I leveraged my background to bring a televised broadcast approach to virtual conferences. Creating a virtual medium where people can gather information, while being entertained, is pretty much the premise of broadcast television. Necessary adjustments were made by developing applications accessible to event organizers, attendees and participants. From there, we integrated individual applications into a single, seamless broadcast platform. It’s my job to make sure technical requirements are in place ahead of each unique broadcast event. I make technical decisions, manage the crew behind the scenes, and serve as technical producer – calling out cues that help direct the show. My experience studying at BGSU really prepared me to be successful in my role at Quince.

"Working in video production allows me to incorporate two of my favorite things: people and live events. I enjoy the fast-paced, thinking-on-your-toes environment that keeps me alert and challenges me to grow every day. Above all else, I love working with people and being able to share their stories. Whether an educational conference, or exciting sporting event, video has the ability to capture a memorable experience as it’s unfolding. Delivering unforgettable experiences to live audiences is by far the most enjoyable part of what I do." 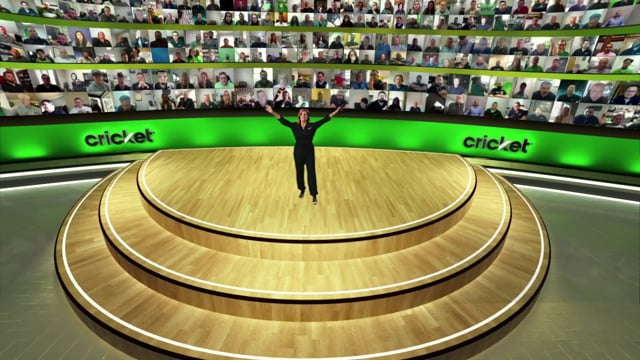